By Frodo Kuipers
2017
Animation
5'30" min.
The Netherlands
No dialogue

A desolate street in a small village in the Old West. Two cowboys face each other in a good-old-fashioned shootout! But when both of the colts fire their deadly bullets, those bullets immediately fall in love with each other, forgetting what they’re supposed to do! This has dramatic consequences… 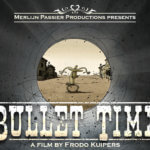 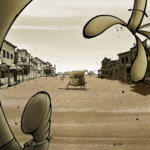